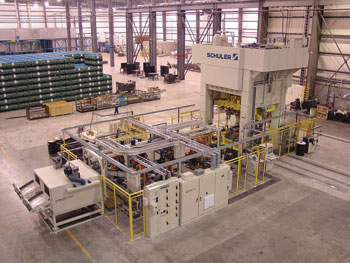 IT manager blends the carpet with the concrete in plan for new manufacturing plant utilizing a single infrastructure for IT and operations.

Operations and IT must fuse together seamlessly in a new era of Internet of Things (IoT).

“Operations kind of handles the IoT part of it, but it’s blowing up more than they can handle, so they’re needing more of IT’s help to understand it,” says Nick Dell, IT manager at Midway Products Group.

Dell has prided himself on being an “ambassador of technology,” acting as a change agent in multiple verticals — automotive, healthcare and legal — during his 17 years in the IT industry. At this juncture, his focus is on a new car manufacturing plant his Michigan-based company is building. Midway products Group already has seven manufacturing plants that support Ford, Toyota, GM, Tesla and more.

“My goal with the operations people is to say, ‘This new plant, we’re going to build it, and there’s going to be essentially one infrastructure supporting both. Not two separate infrastructures,’” explains Dell.

The cost savings from using one combined infrastructure allows for extra money to make the network more robust, redundant and effective. There is a catch … “The people in the front office must understand what’s going on over on the shop floor and vice versa … to adjust procedures and policies, so it actually flows and works,” says Dell.

“Everything is data driven, right now, so they [manufacturing companies] want all this information. And if you don’t have the infrastructure to support it, you’re going to be playing catchup trying to get initiatives done that need to be done to make money,” says Dell.

The IT manager has worked with solution providers on some projects, especially in this new world of big data, but also believes it’s crucial to grow his in-house staff. That’s where events such as The Channel Company’s Midsize Enterprise Summit (MES) have helped.

“Having the peers that you meet and get to talk to really helps … saves you some pitfalls in the future. Then, seeing all the different vendors, it’s an efficiency thing. I can get 30 different vendors for things I’m thinking of in the future and be able to have that at my fingertips. I already have my rolodex and my people that I need to contact,” says Dell.

MES offers IT decision makers exclusive access to more than 80+ top vendors, seasoned Gartner analysts and an elite group of peers. Sign up for the next event—September 17 to 19 in San Antonio, TX.