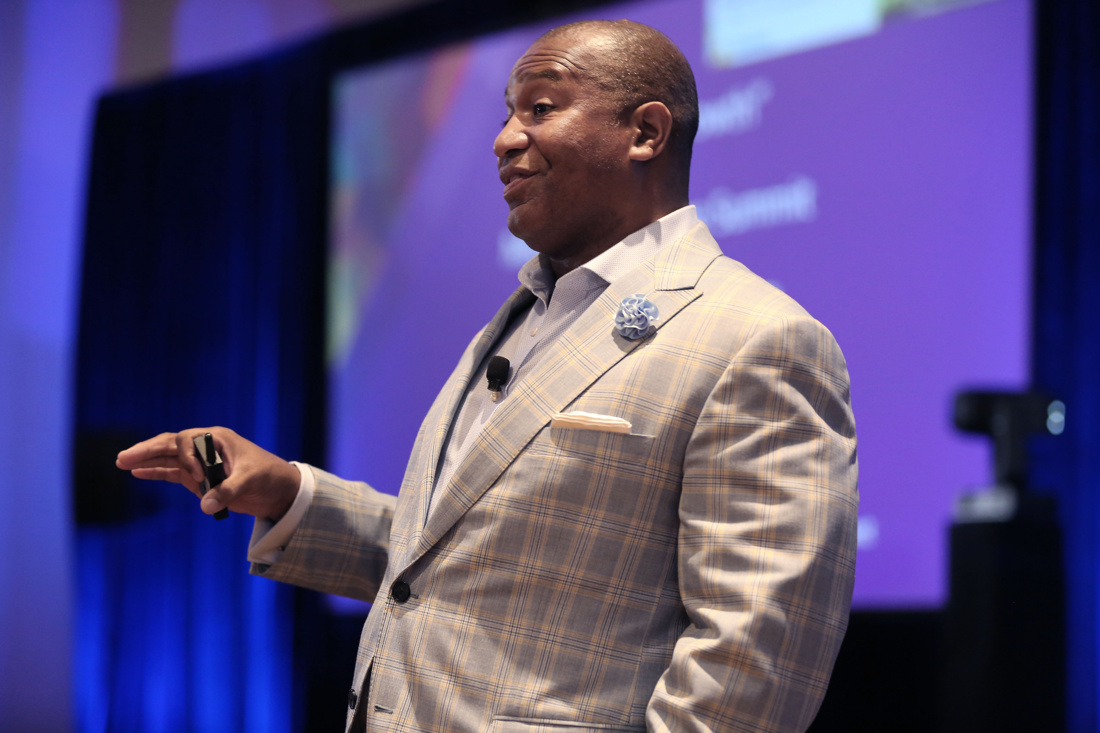 “How do we foster leadership in our enterprise?”

“It’s easy to think of yourselves merely as functional leaders, but that’s not the case. Each of you plays an indelible role in your institution’s ability to not only survive, but thrive.”

Banks said that midmarket IT leaders must see themselves as valuable and influential.

How do you define leadership?

Banks continued that there’s no universally accepted definition of leadership.

“When we talk about the notion of leadership, there’s no single definition of leadership that says ‘You must be in charge.’ Leadership is about influence. Each of you must learn, ‘How can I become more influential in a series of roles and relationships I have to navigate?’”

As one might expect, given Banks’ military background, he didn’t let attendees off the hook easily. Walking throughout the spacious ballroom, Banks kept asking the audience questions throughout his presentation.

“How do you encourage individuals in your firm to take smart risks they know might not necessarily result in immediate success and translate that risk into something to propel the business going forward?”

Audience members said that they don’t make employees do things. “We empower them to do things. We train them. We teach them. We let them fly.”

Banks said that’s a good approach, but not an easy one.

“This notion of agility is important, but it’s hard to create it. The reason why is this invisible force called culture. We know it’s important. Organizations that beat the odds do so because of their ability to learn new things.

“When you hire somebody, what’s the first thing you look at? Cultural fit? Perhaps. Education? Maybe. Problem solving? You say that, but you look at what they did in the past. That’s the number-one indicator of potential is past performance. The number-two indicator is their ability to learn. All too often, individuals aren’t digging into that.”

Banks put it on midmarket IT leaders that they have to evolve if they want to survive.

“When we talk about companies, how long are they lasting? Recently, Dominic Barton of McKinsey cited research indicating that life span of companies had compressed to 18 years and was continuing to decrease due to various forces such as technology, urbanization and an aging population.”

Banks cited a 2016 study from the growth strategy consulting firm Innosight that said in 1965, the average tenure of companies on the S&P 500 was 33 years. That dropped to 20 years in 1990 and is forecast to shrink to 14 years in 2026. Amazingly, about one-half of the S&P 500 will be replaced over the next 10 years if Innosight’s forecasted churn rate holds.

“Your function is leading to the dissolution of ongoing concerns because of the speed at which technology is evolving. If you’re not evolving as well, you are heading toward obsolescence rapidly. If you’re not learning, you’re dying. You are regressing to the mean. When you do, you will embrace mediocrity and ultimately obsolescence.”

“Which is easier to change, the person or the environment around them? Companies take a variety of approaches to this. Sometimes, they swap out the people. Sometimes, when leaders come in and change is required in the culture, they go on a cultural quest. Many times, they don’t even understand deeply how to change the culture. They are just changing the climate. That’s a short-term condition.”

Banks says that to change the culture takes a solid three to five years in order to be successful.

As Banks closed his talk, he said, “If you aren’t actively looking at what the risks are in continuing to pursue vitality, you might be OK for now, but it will lead to obsolescence.”

He shared five takeaways from his presentation:

“If culture is pushing against you, you have to have the wherewithal to push against the culture. You can never allow mediocrity to have a home in your house, but it’s really hard to foster excellence. Excellence is not a single act, it’s a habit. What are you doing to make it your habit?”